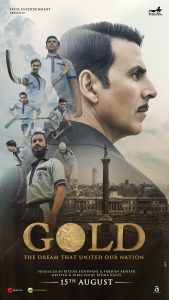 A FILM starring an Indian megastar, shot largely in Bradford with many local extras, is being showcased in new trailers HERE

Gold – the story of India’s first Olympic hockey team – was filmed at Bradford’s Midland Hotel, Lister Park, Dalton Mills, Keighley, and Odsal Stadium, where a Royal box was specially built for the shoot.

Gold set in 1948 tells the historic story of the Hockey team that won the first Olympic medal for India as a free nation on the 12th of August 1948. The same date this year commemorates the 70th anniversary of this historic feat. The story of GOLD highlights India’s emergence from the shadow of the British Empire as it meets the British hockey team on the field, this time as a nation of its own. Gold stars Bollywood megastar Akshay Kumar in the lead role.

The cast and crew of Gold were in Bradford for several months last year, based in Little Germany where production offices and a prop store were set up. Bradford’s City of Film team helped with location filming.

“It was a huge production for Bradford to host,” said City of Film director David Wilson. “We helped facilitate access to a number of locations and provided options for parking the unit base, trucks and catering.

“I visited the production offices in Peckover Street on a 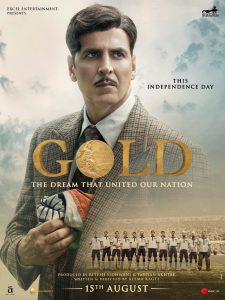 number of occasions and even though everyone was extremely busy, it had a real family atmosphere. Some cast and crew stayed at The Midland and Jurys Inn – they occupied close to 4,000 bed nights in Bradford hotels over a three-month period. The economic impact of such a production is significant. The producers and directors had a great experience here and will be back in the future.”

GOLD is an inspirational story of a team that fought all odds to bring their nation hope, pride and respect.

It is directed by Reema Kagti and produced by Ritesh Sidhwani and Farhan Akhtar under the Excel Entertainment banner.