Yash Raj Films in association with Bradford City of Film presents UK audiences and fans of Ranveer Singh with an once-in-a-lifetime opportunity to welcome the Bollywood superstar as he descends on City Park, Bradford BD1 1HY on Sunday 20th November. Ahead of his next blockbuster release, Yash Raj Films’ ‘Befikre’ directed by Aditya Chopra, the golden boy of Bollywood alongside hi 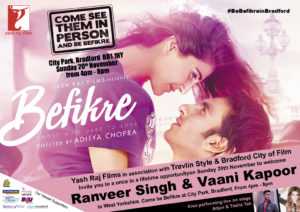 s ‘Befikre’ leading lady, Vaani Kapoor, will be taking centre stage in City Park for what promises to be a Befikre extravaganza for all the family.

Starting at 4pm, the free to attend event taking place in Bradford – the world’s first UNESCO City of Film – will be hosted by comedian Tez Ilyas and feature live performances by international singing sensation and former Indian Idol and Sa Re Ga Ma Pa contestant, Harshi Mad; British music star Arjun; and urban Punjabi singer Tasha Tah, before the Bollywood glitterati grace the stage to introduce their upcoming romantic comedy, ‘Befikre’. In keeping with the film’s theme that celebrates living and loving carefree, Singh and Kapoor will be mingling with the crowds, with lots of surprises in store during the star-studded evening.

Prior to the appearance in City Park, Singh will be partaking in a Q&A at the National Media Museum, following a screening of his debut film, ‘Band Baaja Baaraat’ (2010), commencing at 2.30pm. See HERE for tickets for the film screening and Q&A.

Avtar Panesar, Vice President International – International Operations says, “We are delighted to be presenting Befikre and the stars of the film in Bradford. While also being a UNESCO City of Film, Bradford is a powerhouse for Yorkshire and beyond and engaging with audiences there is vitally important to us. We are extremely excited about the imminent visit.”

David Wilson, Director of Bradford UNESCO City of Film says, ”It is a great honour for Bradford to host such a prestigious event. As the world’s first UNESCO City of Film we have a long history of welcoming creative talent from around the world. The City was also one of the first places in the UK to hold regular screenings of Bollywood movies. A tradition which has lasted for half a century. Events like this will ensure that the legacy from those early days are celebrated with a new generation. The world needs to be a little more Befikre – a carefree approach in these times of change.”