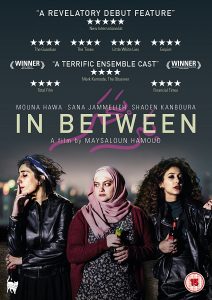 The latest offering of Keighley Film Club will have you rooting for the three female stars in this new Israeli-French film with English subtitles. It deals with the sensitive subject of conservative behaviour in Islamic culture clashing with its intolerance of western liberalisation. So much so that it’s director Maysaloun Hamoud has been the first Pakistani in 70 years to be issued with a fatwa.

The story concerns 3 Pakistani single women living in Tel Aviv who in different ways attempt to balance issues of faith/tradition with modern living in a way that allows them to shape their own destinies. Along the lines of ‘Sex and the City’, Laila is a hard-partying lawyer (Mouna Houra), Salma a bohemian lesbian DJ and Nour a devout naive Muslim computer scientist (Shaden Konboura). Their intertwined lifestyles follow a familiar pattern of an extrovert, a goody and an arty type. When one experiences a tragic incident, it causes the bond between them to become stronger: Laila finds a Mr Right who has many wrongs, Salma leaves one job and has a romantic connection while Nour has a hyper-religious fiance who calls the shots.
According to one reviewer, the Muslim culture’s reaction to these liberated women is one that those supporting the MeToo campaign are familiar with. The soundtrack reflects Tel Aviv nightlife with it’s catchy, pulsating and electronic music. The screenplay effectively portrays the clash between cultural norms and the women’s lifestyles and the result of family shame and communal ostracization.
Reviewers comment include:
“It highlights the clash within patriarchal societies”
“An intriguing and defiantly feminist film”
“An engaging slice of life”
“An unhurried restrained visual style”
“Portrayal of a much freer lifestyle but full of pitfalls”