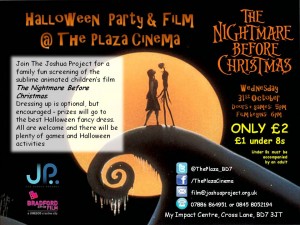 The Plaza Cinema is to host a family friendly Halloween party, with a film screening of the iconic Halloween-themed animation The Nightmare Before Christmas. Doors open at 5pm for all kinds of games and fun activities, with the film starting at 6pm. There will be many prizes including for best fancy dress.

This one off event on 31st October, the evening of Halloween, is to provide people in the region with a fun and safe event for all the family to join in the communal festivities. The Plaza Cinema wishes to make a significant part of its activities welcoming for families, with engaging activities attached to film screenings to enhance the notion of cinema as an event. At only £2 in, and £1 for under 8s, it is easily accessible for the whole family to take part in together.

The interactive nature of the games and activities on the evening will provide a great opportunity for children to play and to meet other people, then sit down together to enjoy a family-friendly, yet appropriately Halloween themed film.

The Nightmare Before Christmas is written and produced by Tim Burton (Edward Scissorhands, Frankenweenie) and is directed by Henry Selick (Coraline, James and the Giant Peach). It features Jack Skellington, who lives in a magical world that revolves around Halloween and is full of inventive and memorable characters. Growing bored of the eternal repetition of this one event, he stumbles across a similar world based on Christmas, and decides that he would like a change. His blend of Halloween and Christmas are fated to be disastrous and Jack needs to put right the chaos he has caused. The stop-motion animation, wonderfully imagined characters and memorable songs will charm and entertain many.

Although it will be emphasised for those in attendance to be respectful of all other guests and audience members, an informal tone will allow for a relaxed and enjoyable atmosphere. This approach was taken in The Plaza’s previous family fun days and has been praised by all as making for a perfect family film watching environment.

This event is being generously supported by Bradford City of Film and Cine Yorkshire.