People and places of Bradford feature in music video that scoops this month’s filmmaker of the month title. 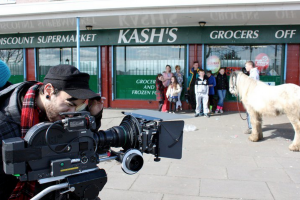 A film shot in locations across the city of Bradford featuring local people has won Filmmaker of the Month for November.

Jack King who hails from Bradford used the city as a backdrop to inspire him in the making of the video for song, “Cold Skin” by folk rock band,To kill a king.

Winner, Jack said: “This is the music video that essentially kick started my film-making career, predominantly shot all over Bradford in Frizinghall, Holmewood and Bradford centre. The majority of the cast were young kids from in and around areas of Bradford and stage 84, and it was a great collaborative effort to get this made on such a small budget. We also shot on super 16mm, the first time I had the luxury, and it was really thrilling to see parts of my hometown come to life on celluloid.”

David Wilson, Director of Bradford UNESCO City of Film, said:” There is a real bold and edgy atmosphere to the film. The cinematography shows Bradford’s landscapes in all their true glory, from urban streets to open fields. The film takes the viewer on a journey of discovery.”

The film will be shown on Big Screen Bradford and the website throughout December. The 12 finalists for each month from 2014 will be judged by a panel of senior media executives at the end of the year and the winner will receive a £1,000 prize with the further opportunity to profile their work on the screen.

Entries are now open for December Filmmaker of the Month. Films offered for consideration may be on any subject but must not exceed five minutes in duration. The content must be suitable to be viewed by people of all ages. Entries should include name, photograph with a short explanation on why the film is important.

You can email them to us at submit@bigscreenbradford.com marked on the subject line “Filmmaker of the month”.

Bradford Big Screen is giant outdoor screen in the heart of one of England’s most vibrant and exciting cities with an international reputation for film and media.