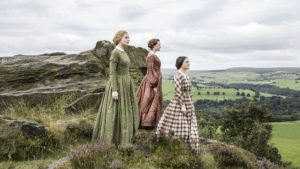 The BBC is wrapping up some festive viewing treats and hitting the road in the country’s only mobile cinema to bring a series of red carpet programme premieres to towns and cities in the North from Tuesday 20 December.

Many scenes were shot in Haworth with support from the Bradford Film Office at Bradford UNESCO City of Film. A replica set of the Bronte Parsonage Museum was constructed on Penistone Hill above Haworth to the delight of many ramblers and locals. 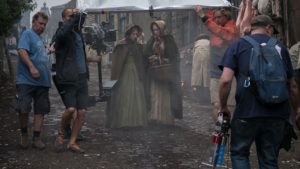 The 100-seat cinema will be rolling into nine Northern towns and cities to spread a little seasonal cheer and broadcast some of the BBC’s most eagerly-awaited Christmas and New Year content – morning, afternoon and night. 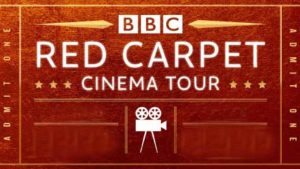 With the content tailored to each different location, general screening highlights will include: a preview of CBBC’s much-anticipated new series of children’s classic The Worst Witch; a thigh-slapping peek at the anarchic goings on in the CBeebies Christmas Panto: The Nutcracker; a seasonal visit to Call The Midwife which sees the nuns off to help a hospital in South Africa; a chance to have a ‘khan-derful Christmas’ with community leader Mr Khan and his family in the Citizen Khan Christmas Special; a peep at one of the jewels of the BBC’s Christmas crown – the animated adaptation of Roald Dahl’s Revolting Rhymes; and a look at the extraordinary wild inhabitants of a small village in France in Wild Tales from the Village.

See coverage on this from the Telegraph and Argus HERE