An exclusive screening of Chico and Rita 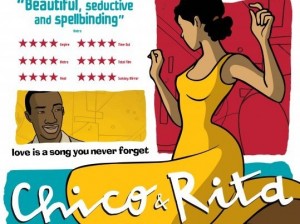 Bradford City of Film are proud to present Chico and Rita at the Saltaire Festival.

A tale of a young piano player with big dreams and a beautiful singer with an extraordinary voice. Music and romantic desire unites them, but their journey in the tradition of the latin ballad, the bollero brings heartache and torment.

With kind support from Cine Yorkshire

In addition to the screening of Chico and Rita, Bradford City of Film will also be highlighting the film talent of students at the Bradford Media School, University of Bradford on the 15th and 16th September at the PACE canteen. A series of short films produced by students at the school will be screened throughout the day on the festival weekend and cover Bradford’s cultural highlights; including films on Saltaire, Ilkley Moor, St Georges Hall, Bradford Industrial Museum among others. These screenings are free to anyone using the canteen facilities.