As the Bradford Family Film Festival draws to a close, the city bids farewell to a fun-filled month of gripping films and exciting activities. Over the month of August hundreds came out to enjoy the events, which varied from the classic Alice in Wonderland to Bollywood favourite Dilwale Dulhania Le Jayenge to Disney’s Oscar-winner Big Hero 6. Even the sun turned up – and we in Yorkshire know what an unreliable guest he can be… 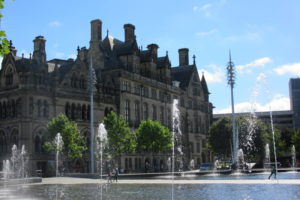 The heart of Bradford Family Film Festival lies in City Park, which hosted over half of the films being shown at this year’s event. The films on the Big Screen drew crowds of 200-300, from all corners of the local community. In addition to the many families present, preschool and community groups were in attendance every week. Many audience members were repeat visitors: “We love it, come down every Wednesday,” said Christine Stokes, visiting with her grandkids aged between 4 and 18. “It’s amazing for the kids if there’s good weather.” Colleen Lewis, a staff member at Light of the World Church and Community Centre, believes the outdoor screenings benefit the children in their group: “It’s exciting and the children enjoy it. It’s a nice day out in the fresh air, and they can interact with other people who come.”

This year the Olympic Fanzone was in City Park from the second week of August, and this added another layer of excitement to the event, with children enjoying relaxing in the deckchairs positioned in front of the screen. Organiser David Wilson of Bradford City of Film 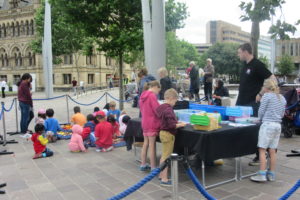 introduced each film over the speaker system, encouraging the youngsters to join in with a count-down to the start of each film, and they did so gladly. A further interactive element was added with an audience cam that showed live footage of the audience on screen, delighting children and adults alike, who were thrilled to see themselves on the Big Screen and happy to wave enthusiastically for the camera. Additional play activities were also on offer as part of the programme at most of the city centre screenings, and as always the Mirror Pool and its fountains provided endless entertainment for families out enjoying the sun. A short video showing the crowds at the showing of Rio 2 can be seen here: www.youtube.com/watch?v=LQjSQAB_cG4&feature=youtu.be

Bollywood film Dilwale Dulhania Le Jayenge marked a new adventure for the Family Film Festival. Screened with the support of Asian Sunday and Yash Raj films, the first Indian film to grace the festival screens was accompanied by glorious sunshine that had a few audience members running for the shade of the nearby trees! Though the hot weather may have deterred some, a sizable crowd still formed to watch, making BFFF’s first Bollywood film showing a success. 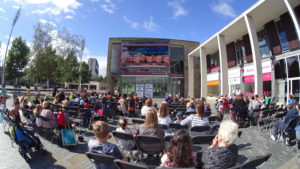 Today saw the festival’s grand finale, a double bill of films supported by Arriva Yorkshire. We knew Minions was a hit, but we weren’t expecting the kind of enthusiasm that saw one fan dressed head-to-toe in merchandise featuring the beloved yellow creatures! The film, featuring the voice talents of Sandra Bullock and Jon Hamm, is a spin-off of the Despicable Me franchise based on the hugely popular servants of that film’s protagonist Gru. It’s said that when it comes to the minions you either love them or hate them, but it was clear what our audience thought! It seems the Big Screen audience cam never gets old, with children dancing in the aisle when they saw themselves onscreen. Though wind and dark clouds threatened to put a damper on proceedings, the sun won through, and the audience was treated to superhero-comedy Big Hero 6. The first Disney animation film to use Marvel comics characters, the film is a favourite with fans and critics alike, and received the Oscar for Best Animated Feature in 2014. Don’t let anyone say we don’t bring you the best!

Screenings for the festival also took place in other venues across the Bradford area. Bradford 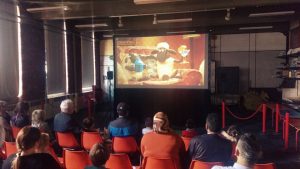 It isn’t hard to see that these events will be missed, but Bradford’s film fans can rest assured that BFFF will be back again next summer, and without giving too much away, we promise that Bradford Family Film Festival 2017 will be bigger and better than ever.

The Bradford Family Film Festival was delivered in partnership with Bradford Council, with invaluable support from the Northern School of Creative Industries.