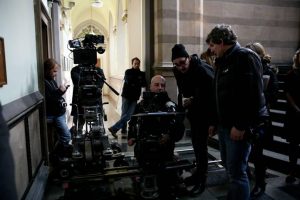 The Bradford Film Heritage project aims to showcase district’s contribution to film and television since the dawn of the moving image in the late 1800s. For the past 100 years, the Bradford District has hosted a diverse range of film and television productions, which display the many sides of the area, from the impressive buildings of the city centre to the romantic moors of Ilkley and Haworth. In creating this archive of the city’s cinematic history, Bradford City of Film aims to expose this exciting aspect of Bradford’s past to the public, allowing both residents and visitors to explore an oft-overlooked side to the district’s local history.

The micro site works equally well on traditional computers as well as mobile devices and tablets. There’s an opportunity to scroll though the timeline and see all of the film and TV titles in decade order and to see which locations were used for each production. There are also a series of self-guided location tours which link to Google maps. Access to the site is free.

The original version of the site was developed in 2013 in partnership with Titus Salt School, the Heritage Lottery Fund Young Roots programme. The project was supported by Bradford Industrial Museum, Bradford Libraries, the National Science and Media Museum, the Telegraph and Argus, the University of Bradford Working Academy, and the Yorkshire Film Archive. With so much activity around filming in recent years and the advancement of technology it was a real team effort to update the app and make sure it would be accessed by more people and truly reflect the city’s status as a UNESCO City of Film.

In addition to information on film and TV locations used in the Bradford district there are links to other sources of information about the productions include the Internet Movie Data Base (IMDB) which is an online database of information related to world films, television programs, home videos and video games, and internet streams, including cast, production crew, personnel and fictional character biographies, plot summaries, trivia, and fan reviews and ratings.

There is also a blog section, which looks behind the scenes of some of the productions, how they came to Bradford in the first place. In the first blog the team look at the hugely popular TV drama Peaky Blinders.

David Wilson, Director of Bradford UNESCO City of Film said; “this was definitely a team effort and we are really pleased with the results. Even though its my job to know much of this heritage it never ceases to amaze me at the amount of film and TV production which has taken place and continues to take place in Bradford. This is something of real interest to residents and visitors to Bradford and I hope it also gives people a sense of civic pride and also appreciate why Bradford truly deserves the title of UNESCO City of Film.”

Cllr Sarah Ferriby, Bradford Council’s executive member for Environment, Sport & Culture said; “We know that many people choose to visit the region because they have seen it in films and on TV. The Bradford Film Heritage app makes it easy to research some of the locations used and also perhaps catch up on films or TV which they may have missed.”