Dark River is the third feature film by Yorkshire writer and director Clio Barnard. For any budding filmmakers or film students wanting to know how to make films watch the films of Clio Barnard. The Arbor, The Selfish Giant and Dark River. This is someone who knows how to tell a story in such a manner which is often understated but leaves a lasting imprint in your mind. Tracy O’Riordan has produced the above three films and the pair make a compelling team.

In Dark River we see Alice, played brilliantly by Ruth Wilson, returning home following the death of her father to claim the family farm she believes is rightfully hers. Her brother Joe (played by Mark Stanley) has been struggling to maintain the farm since the death of their father (played by Sean Bean in flashbacks). A series of flashbacks reveal why Alice left the farm some 15 years earlier but now she’s back and trying to make sense of the situation the siblings find themselves in.

So, the dictionary definition of film noir is; “a style or genre of cinematographic film marked by a mood of pessimism, fatalism, and menace.”

I don’t think Clio Barnard would object to me categorising Dark River as Yorkshire Noir.

I don’t mean that in any kind of negative way. Barnard, in her approach to story telling, squeezes every ounce of emotion from the cast but also from the environment and the landscape of the locations she uses. Every scene is well considered and used as part of the story. One of the opening shots of the breathtaking Yorkshire landscape peppered with electric pylons sets the tone for the uneasy relationships that we see unfold. I remember a similar shot in the opening sequence of The Selfish Giant.

The film has momentum and pace but Barnard punctuates the rhythm with pauses which give the viewer time to reflect and once again absorb the scene. Whether is a dripping drain pipe or the tall grasses in the field moving slowly in the breeze, these shots are every bit as relevant as the dialogue. Often it’s the lack of dialogue which provides the atmosphere – budding filmmakers take note!

Everything about this film is brilliantly bleak; just how the writer/ director intended; the setting, past and current relationships, the struggles of running a farm in rural Yorkshire 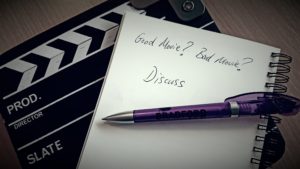 Here are some points to consider when approaching a review: